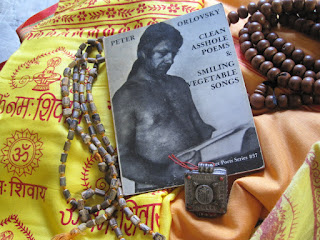 I First saw him with Allen Ginsberg in lobby of CBGB 2nd Ave. Theater December 30, 1977 at a Patti Smith concert.
Then Saw Allen read poems for him William Paterson College May 1978.
I Met him at Raphael Soyer's opening Cooper Union 1985. He asked me what my birthday was, I told him it was the same as his. And I Saw him many times after that in his various states of mind.
We shared a birthday.  He was there when I took Buddhist refuge vows at Kalu Rinpoche's Center on West 19th Street October 15, 1991. He tiptoed around the room speaking in a hoarse whisper. He was, what Herbert Huncke called, a natural poet. His verse flows effortlessly from an immediate mind & holy place. Bye, Bye Peter. Work is done.
http://www.ubu.com/sound/disconnected.html
http://www.youtube.com/watch?v=Ow7QcWBqvqU
Posted by WRD at 10:53 AM