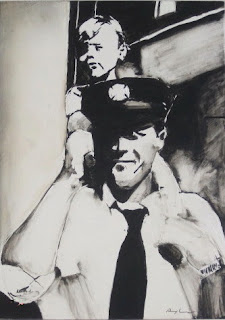 On my 39th birthday I had dinner at a diner in Santa Cruz, CA. I wanted something exotic as it was my birthday but I couldn't successfully navigate the city of Santa Cruz to find a decent restaurant. The outdoor mall was populated solely with coffee bars. I settled for the diner as it was off the beaten path across the street from a Goodwill store and an eye shot from the city bus stop. Still reminiscent of a dining car in its stainless steel and chrome decor, it offered pure Americana with an eclectic twist in that there was an elegant, somewhat hip wine list and sushi on the menu. I settled for a turkey dinner with all the trimmings. Outside my window people walked in and out of Goodwill, ambled home from work, or waited patiently for the next bus.  A  steady ocean breeze blew soot and sand into the air as the sunset. The waitress brought my coke, as I unwrapped my straw I noticed a young family across the dining room. A mother, a father and a little boy of about three or four. I was absolutely riveted by the affection that poured from the eyes of the father to his son. A clear, uninhibited love you seldom see displayed in public. I smiled. My waitress delivered an enormous plate of freshly sliced turkey, mashed potatoes with gravy, cranberry sauce and stuffing. “Enjoy!” she said with a smile. As I ate I couldn’t help but keep looking over at this little family - the father so totally engrossed in every new discovery of his son who held out bits of food before eating, clapped at nothing in particular or giggled excitedly. I was transfixed. My meal finished, the waitress suggested desert. I studied the menu. I was about to order a slice of chocolate cake when I decided, in its stead, to go for bread pudding. Bread pudding, my all-time favorite. Bread pudding - a somewhat rare treat that my father made to perfection, usually just to make me happy. No particular reason. It was his way of expressing his love for me. It arrived redolent of vanilla and cinnamon. There I sat, eating a deep ice cream dish of hot bread pudding in July, in Santa Cruz, California. It tasted just like my father's and for a moment I was once again bathed in his love. I looked out the window lost in a thousand memories when out of nowhere the jukebox in my booth clicked in. I heard the first strains of a familiar Johnny Cash riff and was suddenly treated to “I Walk the Line."  My father's favorite song. I was stunned for I hadn't opted for the jukebox. My heart leapt. Was this really happening? I became choked by emotion for my mother had just died eight weeks earlier (my father had died in May of 1983). I welled up, tears stinging my eyes. I sat listening to the song, remembering my father, feeling his presence, and in the taste of bread pudding, once again feeling his love and affection. Just like the father and son I had watched sitting across from me.
(Click the link to hear Johnny Cash sing I Walk the Line) 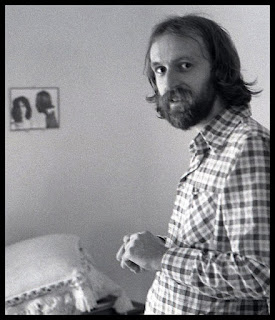 Ernest Thoen, Photographer
(June 10,1946 –June 2, 2011)
“Guru death I do thank you for inspiring me to sing these blues.”
-Allen Ginsberg, Father Death Blues
Ernest Thoen was a gifted artist and photographer. He possessed the soul of a poet and not unlike the poets he photographed, he was able to capture the simultaneous particulars of a moment, draw them together in balance,to thus harmoiously reveal the essence of his subject. He was a true bohemian, fearless. He ignored the vomit that stained an empty stage front chair at Patti Smith's gig at Boston's Jazz Workshop for the perfect shot. There she is - transcendent, messianic, as she is transported, eyes closed, hand grasping the mic, boney arm powerfuly draped across her chest, on the back of a crow en-route to Birdland. It was her first tour outside The New York Metropolitan area having just played Nanuet's Red Rail a few nights before. She was ready. So was Ernest. He got it. No other picture from this seminal period of her career crystallizes all she was then or was meant to be – a shaman. When he photographed Allen Ginsberg at the 1972 Republican Convention in Miami, Florida he captured every aspect of Allen's being - the mystic inheritor of William Blake's vision, the writer, the activist. How? He got him in action, protesting, on the street - full of righteous anger and love, pen clipped in his Vajra (Tibetan Buddhism) tee shirt surrounded by the wrestless youth of America en masse. That was Allen.  Ernest was always on the frontlines. 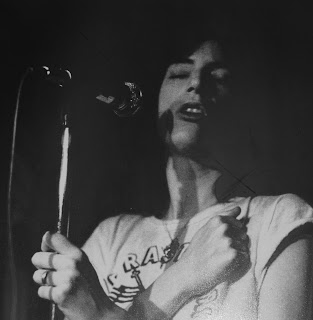 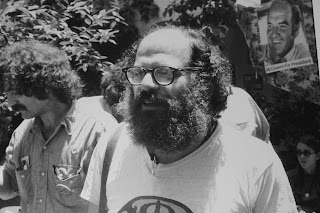 Photos (c) 1972, 1975 The Estate of Ernest Thoen
It was at the October Nyack (NY) Street Fair in 2010 where I first encountered these magnificant portraits. I was quickly stopped in my tracks and taken from the milling crowd that surrounded me. I was blown away. In the swirl of the colors of that day those black and white photos stopped my mind the way only a Holy Man can. Short on cash, I bargained with Ernest. It was in that bargaining that a friendship opened up as we talked about the Beats, poetry, the youthful rebellion of the 60's and 70's. We were kindred spirits. I knew it, I'm certain Ernest knew it too. Why had we not known each other sooner? Why had our paths seemingly been travelling at a trajectory from one another? We will never find out. It was Ernest who, that day, shook me from the stalemate I was experiencing with my own creativity. He made me remember who I was when I was called upon to be an artist, where the spark was lit, who lit it and why. I experienced a rush of energy, a sense of recognition. With Ernest's photos, it as if someone had been there to retireve sacred scenes I had had only imagined or read about. I pondered where I'd put Ernest's photo (he suggested the kitchen) and as our first conversation ebbed, I knew it would be in my shrine room. Ernest beamed at the prospect as we bid farewell.
In the days after our intial meeting Ernest and I began sending a series of brief emails to one and other. Ernest was overjoyed at the placement of his picures and expressed an interest in coming over to photograph them. I was more than happy to accommodate his request for the choice of location seemed natural as both Patti Smith and Allen Ginsberg saught to expand human consciousness by navigating the deeper terrain of the spirit. They fit in quite well among the Hindu and Tibetan inconography that adorn my shrine room. As November approached our schedules made it difficult to confirm a date. Unforunately it was not to be. Ernest never got to see the home I gave his art and I feel bad about that. Over an exceptionally brutal East Coast winter we lost touch. I emailed Ernest in late February to let him know I'd be having a one man show in Nyack -“I'll be there!” was his simple, immediate response. And he was. Despite a steady stream of old friends, family and reunions with lost contacts, Ernest's presence made the most impact. He asked probing questions about my work, wanting to know everything I had thought about when I worked. Talking to him (and his lovely wife Jacqueline) I was able to truly articulate parts of my creative process that I had never really considered before. It was revelatory. We spoke at great length of poetry for they were palnning a trip to San Francisco in the Summer. I revelled at the opportunity to give him a compact history of Bolinas, CA (about an hour from SF) and its place as a distaff community in Modern American Poetry. Ernest was thrilled that such a place existed. The Poet's Corner as he would refer to it in a future (and last) email.

Several days later Ernest wrote me to tell me he was ill. It didn't sound good, yet he seemed optimistic. He wrote again and was more specific with his condition -Lymphoma. I was heartbroken. But Ernest sounded strong, resilient albeit somewhat resigned. He was cancelling some street fairs but still planning his trip to The Poets Corner outside San Francisco. It was the last I'd hear from him. In the weeks that followed there would be no more emails. I feared the worst yet continued praying for him. I seem to have a knack for missing the immediacy of death. It is now August and I have now just seen my dear friend left his body on June 2, 2011. I believe I knew in my heart what had happened for I remember a late Spring morning when the energy shifted during my meditation in the shrine room that houses Ernest's art. The wiring on Ernest's photos snapped a bit like taut guitar strings. I knew. I recognized it. It is always in that place within our hearts we dread to go because it speaks of loss and our helplessness in its finality. And so my dear friend is gone, not even a year  after our first hello. I know it was an honor to have him in my life though it was for way too short a time. But he is still with me. Evertime I look up (like now) and see Patti Smith starkly passionate in another dimesion, every morning when I offer incense to the four directions, theres' Allen Ginsberg marching from the East across the span of time and space into the now. It is there I also see Ernest, successfully navigating a great, distant realm through the magic of his photography.﻿
Posted by WRD at 3:06 PM No comments: